The Tour of Spain in 1958 was the last competition of Luis Puig as the coach of the selection. The differences of opinion with the president of the Spanish Cycling Federation, Alejandro del Caz, and the reluctance of the figures of the pack to accept his methods, led him to leave his position. He returned to Valencia, took charge of the Valencian Federation again and laid the foundations of his long and successful career as a manager.

The development of Valencian cycling and the impulse of the Tour of Levante became his immediate objectives. However, Puig could not live away from the top competition and began working with the radio station “La Voz de Levante” and at the Levante newspaper as a cycling chronicler. Thanks to his new journalistic role, he could travel to the major classical tours and the three major ones, which allowed him to follow the competition from a new and enlightening perspective.

In 1966, he became a member of the Spanish Federation, under the presidency of Manuel Serdan, former godfather of Federico Martin Bahamontes. Two years later, he convinced the national Sports delegate, Juan Antonio Samaranch, that he was the right person to renew the organizational structures of Spanish cycling. In 1968, Samaranch relieved Puig Serdan and reached the presidency, offering him the possibility to continue the modernization which had already began in his time as coach. 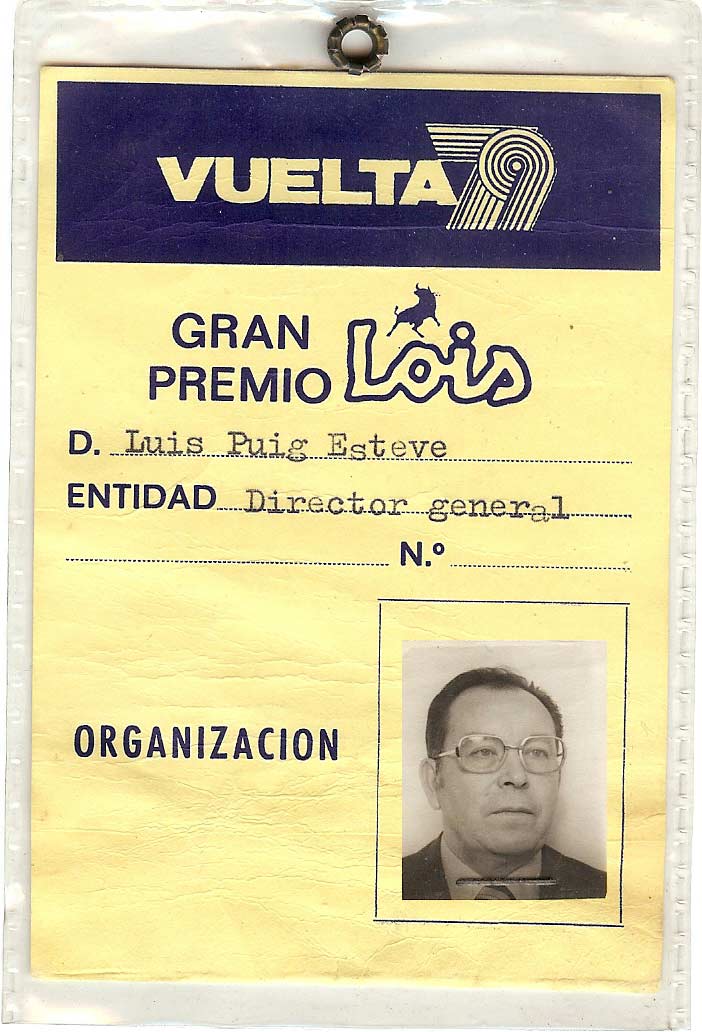 During his sixteen years in terms of office, Puig progressively increased the budget of the regional federations to promote the work from the base. In his memory remained the place from which he had chaired the Valencian Federation, located in a pigeon loft where the meetings mixed with the movement of the birds and their owners. He promoted the creation of a national calendar of cycling events, which had to be organized by the federated clubs, and the formation of the first professional teams. He remained in office until 1984, a period in which the Spanish cycling experienced, by itself, a step forward.

His biggest challenge as the president of the Spanish Federation arrived in February 1979. The newspaper “El Correo Español-El Pueblo Vasco”, organizer of the Tour of Spain since 1955, announced his resignation to sponsor the Spanish race two months before the meeting. The Tour was in danger of disappearing. Puig took responsibility and directed the technical committee which had to save the race, where Ramon Mendiburu stood out, Spanish coach and confidant of the president.

In just over a month, Puig´s effort and his colleagues’ took shape in new sponsors and a hastily negotiated path thanks to the mediation of territorial federations. On March 31st, 1979 the so called Tour of the miracle was presented, which did not lack international figures such as Joop Zoetemelk, final winner. “He leaves and, above all, finishes successfully“, celebrated Puig, who acknowledged the support of the presidents of the federations: “They have been key.”

Puig involved the company Unipublic in the project of the Tour; Unipublic was a young advertising agency run by the brothers Enrique and Tito Franco. On the next two editions, the increase of the sponsors, thanks to television broadcasts, equilibrated the economic balances and consolidated the Spanish round, whose disappearance had avoided the intervention of Puig and his team. “My work is finished, it can walk alone“. Unipublic continues to organize the Tour of Spain today.