The last remarkable episode of Luis Puig´s life pulled out a night of July of 1988, while the president of the UCI was enjoying his holidays along with his family in his villa in the mountain. At 2 a.m. the phone rang. It was José Manuel Echávarri, the director of the Reynolds team, whom he had been told that his race leader Pedro Delgado had failed in a drug test, without specifying the substance.

Xavier Louy, the tour director, forced Perico Echávarri to withdraw him from the race without prompting a follow-up test to avoid scandal. “You cannot do that, ask for the follow- up test. No one can stop Pedro out on the stage while we wait for the outcome of the test. I will arrive tomorrow, I do not know how but I will get there and we will take the decision”. Puig flew from Valencia to Paris and arrived to Limoges the following afternoon. The news of Delgado´s positive had already leaked to L’Equipe diary and the television channel Antenne 2.

Puig visited Perico in the Reynolds hotel. “Tomorrow you go out and make a big stage. Tonight you have to sleep, be confident“. The next morning, the result confirmed the presence of probenecid in Delgado´s urine, a diuretic commonly used to mask the use of other substances such as anabolic steroids. The UCI president began a long day of meetings, pressed at all times by the Tour organizers to sanction the Spanish cyclist.

Probenecid appeared on the list of banned products in the International Olympic Committee (COI), but not in the UCI, which was scheduled to include it only ten days later. Luis Puig met with the international deputies of the Tour, led by President Mario Prece, who confirmed that, under the rules of the French round, the UCI regulations governed in all matters relating to doping. Puig rang the chief doctor of the UCI in Czechoslovakia, and he confirmed that the substance would not be prohibited until the following August. 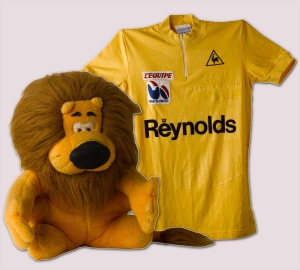 According to the regulations, Delgado was innocent. The anti-doping laboratory in Paris should have not announced the positive, which appealed to the COI list. After some hours of tense talks, Puig took the decision of not sanctioning the Reynolds rider and ordered Prece to write the statement for an immediate announcement. The deputy, pushed by the organization of the Tour, disagreed: “You are risking your position, President“. Puig took full responsibility for the decision: “Just complying the rules and prestige of the UCI“.

The commissioner Preze read the statement signed by Luis Puig in front of a packed press room that could not wait any longer: “The probenecid was not on the banned list in this day and therefore the punishment is unfair for Delgado”. Puig, exhausted after two days of meetings and few hours of sleep, went to the hotel Reynolds. In the lobby, he argued the decision to the Spanish reporters who were there assembled and communicated in person to Perico: “It has been very hard“.

However, the Tour and his surroundings did not accept the decision of the UCI. L’Equipepublished a critical article about Luis Puig and the race director, Xavier Louy, assuming that Delgado would not be a clear winner. Puig decided to remain in France until the end of the Tour, maintaining a public rough confrontation with Louy, who only settled the intervention of Jean Pierre Courcol, director of the company that owns the Tour and L’Equipe, among other media.

Pedro Delgado arrived in Paris in yellow and with honor, which made him the third Spanish who climbed up the highest drawer of the podium on the Champs Elysees. Three months later, the owners of the Tour ceased to Louy and presented the new race director Jean-Marie Leblanc. A year later, in August 1989, 164 countries reelected Puig by acclamation as the leader of world cycling. He could not complete his third term. The 31st of July, 1990 a stroke killed Luis Puig while resting at his home in Valencia.